This year at bOing! International Family Festival we are lucky to be able to welcome several dance acts from across the globe, covering various styles like hip-hop, contemporary and Bhangra, as well as encouraging you to bust out some moves in our Silent Disco and 10 Minute Dance Parties!

We are also bringing a lot of dance to the streets of Canterbury City Centre on Friday 24 August 2018 – you can get involved in a dance battle or watch some incredible moves in the middle of your shopping!

If you are a fan of a specific style, or want to find out which styles you can find at bOing!, we have some suggestions for what you can see!

Created originally on the streets, hip-hop has grown to include several niche styles like ‘breaking’, ‘freestyle’, and ‘commercial’. And we are bringing a few of these variations to bOing!

Bringing the freestyle art scene from Melbourne, Australia, Efren Pamilacan is asking you to be involved! You can challenge Efren in a dance battle at bOing!, so get practicing your moves!

Efren Pamilacan is giving us even more phenomenal choreography, but this time with music from Jason Ng, and the revolutionary use of holographic 3D overlays from HYPER REELIST.

Adding an oriental twist to their style, Cie Dyptik are performing D-Construction, putting 6 dancers inside a metal scaffolding. Also, Cie Dyptik are offering two workshops for teens aged 8-12 and 12-18 to learn some new hip-hop skills.

Contemporary dance is a combination of several dance styles, with elements from ballet, modern, jazz, and has a strong focus on technique.

Then, taking on prominent political issues, Moving Memory has teamed up with members from Gulbenkian’s Youth groups to create a commentary on the patriarchy. Start Stomping is as distinctive in its message as it is with its choreography and presence of a 16ft inflatable man!

Inclusive dance company, Stopgap, employs both disabled and non-disabled dancers to create collaborative pieces together. Bill and Bobby is one of these! Featuring a bathtub, Bill and Bobby pay tribute to the silver screen and the tradition of ‘happily ever after’ with their witty choreography.

We want bOing! International Family Festival to be as multicultural as possible, because the arts can really bring people from different backgrounds together. This year we have it in spades!

Cohesion Plus & Four by Four Bhangra

Cohesion Plus and 4×4 Bhangra are collaborating to bring Bhangra to bOing!: a dance style from India! Not only are they performing on Friday 24 August in the city centre, but Cohesion Plus are performing at bOing! on the University of Kent campus as well with Bollywood Brass Band! You can then learn some Bhangra moves in the Bhangra Dance and Drumming Workshop.

National Dance Day was created in the United States by the Dizzy Feet Foundation and takes place on the last Saturday of July every year. The day was created to not only encourage physical exercise, but also to celebrate the beautiful art form itself! Dance is amazing in how many styles there are, but all connected by the passion of expressing yourself through movement. 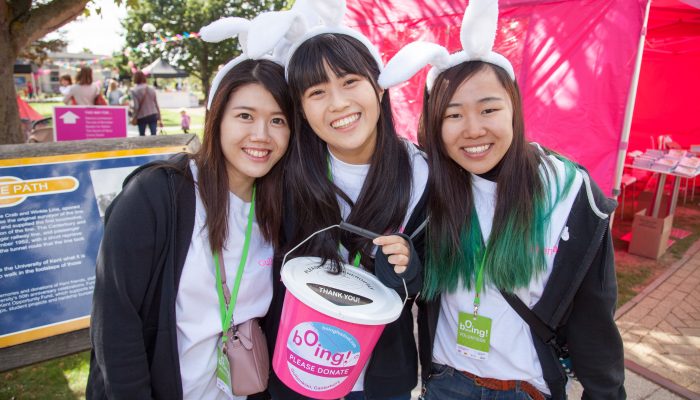 “Experiencing bOing! as a volunteer was a blast!”